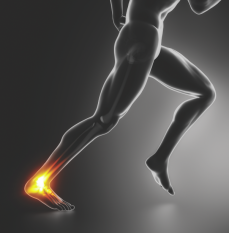 Went to the doc on Thursday for a follow-up on the Achilles.  I told him I’m a little concerned that despite the stretching and strengthening, the tightness remains.

The morning soreness is a lot less than what it was, a big step forward.  I’m not dealing with soreness after long periods of sitting, either, which is great.  The Achilles has also been able to tolerate short runs (I’ve gone as far as four miles since the two-month layoff following the PRP injection).

The big questions I had for him were whether or not I should continue to slowly increase the mileage, and at what point he’d recommend getting off the treadmill and back into the real world to run.

He took an ultrasound of the area, and told me that things have improved, but still aren’t quite back to normal.  He also let me know that the options going forward were twofold:  1)  I can continue doing what I’m doing, and perhaps have the PRP shot done again, or 2) I could opt for the Achilles-lengthening operation.  There is no way in the world I’m doing the second one, unless EVERYTHING else fails (and maybe not even then).  So, I chose to continue doing what I’m doing, in the hopes that a religious devotion to the stretching and strengthening regimen will do the trick.

Bottom line:  as long as the pain level doesn’t permanently spike back up, I’m OK with mild-to-moderate discomfort being the norm.  That operation would put me down for a year, and that’s just a bridge too far at this point of my life.  Maybe once the kids are older, and once I’m out of the military, but not now.

That said, one more long period of time on the shelf would have me seriously considering it!

Beyond that, the answers were mostly as expected:  continue with the home rehab, slowly increase mileage, monitor progress and listen to my body.  What surprised me was his recommendation regarding getting off the treadmill.

I always figured that it was the trails that had messed me up in the first place.  After all, my last trail race ended in catastrophe (severely sprained ankle, fractured tibia).  I thought the uneven ground throwing different angles at my already-weakened Achilles was the problem, and that I’d need to work on stability exercises (specifically the one-leg standing exercises) before heading back onto trails and hills.  Doc says that it’s the pounding that does it.  I asked if getting away from lower-profile shoes and a slightly higher heel-drop might help.  He explained that it’s not about the padding on the shoes – it’s about the padding on the ground.  The softer the terrain (however uneven), the better it’ll be for the Achilles.  He recommended staying off the roads as much as possible, which translates into a maximum of 1-2 runs on the hard stuff per week.

I can’t even imagine training for a half or full marathon without consistently hitting the bricks.  Looks like I’ll have to get used to the thought….

Fortunately, I live near a great trail system, which I’ve been avoiding for the last few years.  I always liked running in the shade, anyway!